With almost a few days before election Filipinos who are registered voters with the Commission on Elections (COMELEC) will decide the faith of their candidates for the different elective post to serve them for another term of three (3) years.
Some thinker's says that this exercise is just an "insanity in Philippine politics" wherein they (Filipinos) want change when they kept on electing the same people.

Regardless of what others may think we should do and exercise our right to vote. Our forefathers have fought with their lives for us to practice such right. And honoring them by electing the right person to serve the public is the very least we can do.

On Monday, May 13, 2013 all real estate service practitioners should exercise such right and vote for their chosen candidates and elect especially those who support and implement all Laws that governs the practice of Real Estate service in the country. 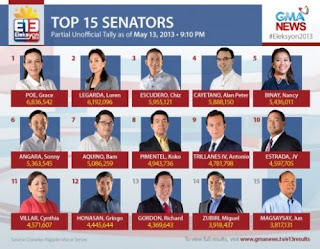 With almost all the Local Board of Canvassers (City,Municipal,Provincial,Congressional) proclaiming local winners in the different part of the country and the COMELEC National Board of Canvassers promised to announce and proclaim the top 9 or all the 12 Senators Elect before midnight of May 15, 2013 truly prove the "usefulness" of the PCOS machine. The unsung heroes of the election our public school teachers, the PNP, the AFP and other government officials who made the exercise a success and generally peaceful and most of all to every registered voters Filipinos who went out and voted for their chosen candidates.

No individual, groups, country or any entity have the right to speak against or make jokes the way we (Filipinos) chose or elect any candidate to be our future leaders. Regardless of who the winners are as long as the simple rule of the majority is respected wherein the voters are allowed to cast their vote freely then the said exercise is a democracy in progress and a country in action Philippine style.