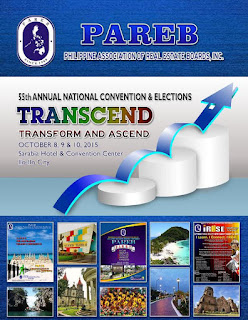 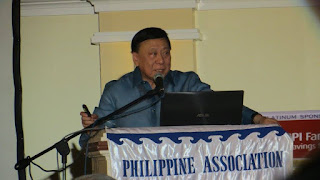 And also PRC-PRBRES Chairman Eduardo G. Ong, Ph.D., DPA, DBA, present an update regarding the upcoming Asean Integration which would have an impact on our industry and the latest guidelines regarding CPD & CRESAR or Comprehensive Real Estate Seminar and Review for Brokers licensure examination schedule next year for re takers and those graduate of the course B.S. Major in Real Estate Management.

The Most Popular Lady of PAREB (MPLP) Committee announced the Ms. PAREB 2016 winner,  Ms. Gina G. Baldovino of ACRB and was crowned during the said event. With the candidates dress elegantly with their evening gown and their artistically Festival Queen motif designed costumed posing their beautiful smiles with "tiis ganda" attitude.

The final day of the event was the election of the 2016 National Officers and Directors the most able and willing candidates were introduce to the delegates who are eligible to vote and they have finally spoken guided only by their conscience to wit;

PAREB COMELEC Chairwoman PNP Melinda P. Lit announced all the elected officials of the 2016 National Officers and Directors and we at PAREB-CAMANAVAREB hope and pray  that the dividing effect of this year election becomes the beginning of a cycle in making the process of election a metamorphosis of greatness for PAREB. Transcending, Transforming, Ascending in 2016 onwards.

PAREB is the premier and the largest national real estate organization in the country.